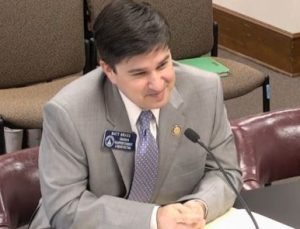 Throughout my time in the Senate, I have been honored to serve a number of committees to represent our regional needs. As Chairman of the Reapportionment and Redistricting Committee, we work with state leadership to ensure sound policy for the betterment of our redistricting process.

Committees within the Georgia General Assembly play an essential role to our legislative process. The committee does what the Senate and the House of Representatives could not do as well by functioning as a whole.  Therefore, each member of the General Assembly sits on numerous committees. Once a bill is brought forth by a legislator, the bill is assigned to a committee for further review. The committee is responsible for completing the initial groundwork of what the legislation is intended to do. Committee members often call experts in the respective subject area to testify on behalf or against the proposed legislation. Once in committee the bill may have a hearing where the committee votes to move the bill forward or not. Click here to learn more about the legislative process!

Senator Brass is honored to serve on the following committees:

The Committee on Reapportionment & Redistricting is responsible for creating and updating state and congressional district lines in accordance with data from the United States Census.

Natural Resources and the Environment – Secretary

The Committee on Natural Resources & the Environment has general jurisdiction over issues that relate to the development, regulation and conservation of the state’s public lands and its natural resources including water, energy (such as surface mining and oil and gas production) and wildlife (including hunting and fishing).

The Committee on Economic Development has general jurisdiction over economic development, business, trade, and any proposed measures that will affect the presence of tourism throughout the state.

The Committee on Education & Youth has general jurisdiction over K-12 education, certified employees of schools and school facilities. It also reviews legislation related to childcare and Pre-K activities.

The Committee on Rules has jurisdiction over the Rules of the senate and its order of business, including the setting of Senate calendars for consideration of bills and resolutions on the floor of the Senate.